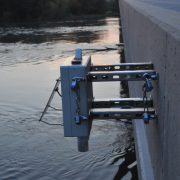 The IFC stream sensors operate using an ultrasonic transducer to measure the water level. The sensors are completely self-contained and solar-powered. A cell modem transmits data from the stream sensor to the IFC-developed Iowa Flood Information System (IFIS) every 15 minutes where the data is publicly displayed in an easy-to-use, interactive Google Maps-based web environment.

With funding support from the Iowa Department of Natural Resources (IDNR) and local communities, the additional IFC stream sensors have expanded the statewide total to nearly 260 locations, complementing the Iowa U.S. Geological Survey (USGS) network of about 200 stream gages. The need for additional flood monitoring became apparent after the 2018 fall floods when IFC received requests from state and local partners for over 100 proposed new sites on Iowa’s rivers and streams.

A majority of the new stream sensor sites were selected by the Iowa Silver Jackets team, a group of interagency state partners that includes IFC, IDNR, Iowa Homeland Security and Emergency Management, USGS, U.S. Army Corps of Engineers, National Weather Service, and local emergency management coordinators. In addition, many community leaders have recognized the benefits of having a stream sensor to provide advanced flood alerts to protect their towns. A list of the new stream sensor locations now collecting and displaying data on IFIS is available below:

For Iowa City residents and University of Iowa students, it’s impossible to forget the floods of 2008 – not with more than a dozen different flood mitigation and recovery projects underway across campus.

Luckily, the Iowa Flood Center (IFC) continues to work hand in hand with the Iowa Department of Natural Resources to better inform citizens of Iowa City, and countless other communities across the state, of potential flooding.

The IFC stream-stage sensors, an idea pioneered by both UI engineering students and faculty back in 2010, have been an “overwhelming success,” says Dan Ceynar, an IFC engineer.

Of the 100 sensors funded by the DNR, the first 50 sensors installed have been revisited just once or twice for minor updates. The majority of the more recent sites, however, have never required a follow-up visit.

“When the IIHR approached the DNR about the stream-stage sensors that they developed, we felt it would be a great way to see if the information provided by the stage-sensors would fill in some of the information gaps, especially for local emergency managers and having time to respond to a potential flood event,” says Lori McDaniel, supervisor of the DNR’s Division of Flood Plain Management, Dam Safety, & Water Quality Standards.

Several stream-stage sensors await submersion in a wet tank in the IIHR Hydraulics Wind Tunnel Annex to be tested for leaks.

The sensors, priced at $3,500 apiece, are a system of electronics, modems, and antennas encased by weather-resistant aluminum and installed on the downstream side of bridges. Each sensor emits an electronic pulse to measure the distance to the water below and sends that data via cell modem to a central database every 15 minutes.

Earlier this spring, about 15 sensors sat submerged in a wet tank, being tested for leaks, in the IIHR Hydraulics Wind Tunnel Annex. With more than 50 more in progress, Ceynar estimates the IFC has built a total of 250 sensors, most of which are the new and improved models.

These second-generation sensors measure distances of roughly 44 feet, 10 feet more than the first batch. The improvement was necessary for bridges more than 20 feet in height. The newer sensors have also shed their radio-like communication capability — a feature Ceynar says went virtually unused.

While the majority of the sensors were installed at request of the DNR, many Iowa municipalities, counties, colleges, and universities have asked the IFC to install sensors of their own — and the list keeps growing. Even state and federal agencies, such as the Iowa Department of Transportation and the National Weather Service, have had sensors installed at various locations.

“I use gauges as one of my agency’s tools to prepare for and predict rising water levels, which in turn causes a list of various actions to take place,” says Larry Hurst, director of Mills County Homeland Security & Emergency Management Agency. “[I] would actually like several more units installed in my county.”

Although the IFC is the only academic flood center in the nation, it functions as a non-profit and must approach partnerships with caution, says Ceynar.

“The IFC bridge sensors receive quite a bit of interest from other states, as well as from other agencies and engineering companies as far away as Australia,” says IFC Director Witold Krajewski. “While currently we have no plans to create a for-profit company that would market the sensors, we feel that our impact would be greatest through some kind of a national or regional flood research center. We are exploring different avenues toward this.”

Citizens are encouraged to use the Iowa Flood Information System (IFIS), an online maps-based application, to view the stream-stage information for their area.

The Iowa Flood Center’s stream-stage sensors, mounted on bridges around the state, proved their resilience last week when floodwaters swept through Eastern Iowa. Last Wednesday, at least two of the IFC sensors in the Clear Creek watershed seem to have been overtopped by floodwaters and survived to send more data once the water receded.

The boxes housing the sensors are designed to be submerged in water and still function after the water subsides, says IFC Director Witold Krajewski. “Now we have field proof that the design was successful,” he explains. While the sensors are underwater, they stop sending data. Users of the Iowa Flood Information System (IFIS) will note this absence of data as a white or blank space in the graphic representation of the water levels (see image below).

Gaps in recorded data from this gage over Clear Creek indicated the sensor could have been submerged in floodwaters during heavy rains on April 18, 2013.

Krajewski says that he does not have complete proof that the sensors were submerged, since the sensors do not “see” the distance when water levels are closer than about a foot from the sensing unit. Despite this, he believes the pattern of the reported data strongly suggests that they were in fact underwater.

If you have photos taken during the recent flood event that show the IFC sensors or their bridges actually underwater, please send them to sara-steussy@uiowa.edu.

The Fund-a-Sensor program, an online fundraising campaign, allows interested Iowans to support the expansion of the IFC’s electronic stream-stage sensor network. Currently, the IFC has deployed 129 of these sensors, with a goal to add 100 more. The IFC will deploy one additional sensor for every $3,000 received in donations. In addition, anyone can vote online to help select the location of the sensors — no gift required to vote.

“This is a tremendous opportunity to help the Iowa Flood Center meet the need for more extensive monitoring of Iowa’s rivers and streams,” says IFC Director Witold Krajewski. “Donors who make a gift of $3,000 — enough to cover the cost of one sensor — can also work with us to help select the site for the new sensor.”

Gifts to the Fund-a-Sensor project will be made through UI Foundation; gifts to the foundation qualify as charitable contributions for federal income tax purposes, and are deductible to the extent allowable by law.

Krajewski adds, “The IFC stream-stage sensors provide valuable real-time information about water levels, allowing Iowans to be better informed and prepared for future flooding. We believe this extra measure of preparedness can save property, resources, and lives.”

To view the proposed expansion of the sensor network and learn more about the Fund-a-Sensor project, visit http://ifis.iowafloodcenter.org/ifis/fund/.

The Iowa Flood Center is part of IIHR—Hydroscience & Engineering, a unit of the UI College of Engineering. The IFC was created in 2009 in the aftermath of the historic 2008 Iowa floods and is supported by state appropriations to improve flood monitoring and prevention in Iowa.

Floods can happen unexpectedly, and often catch motorists off guard. The results can be fatal — in fact, as little as two feet of water can carry away even SUV-sized vehicles. According to the National Weather Service, more than half the deaths caused by flash floods happen when vehicles are swept away by floodwaters.

Timely, accurate information would give motorists a better chance of getting home safely, but given the vast number of road-stream intersections in Iowa, how is it possible to reliably predict when and where flash flooding will occur?

In cooperation with the Iowa Department of Transportation (DOT), researchers from the Iowa Flood Center (IFC) at the University of Iowa are working to do just that. They have initiated a two-year research project to design, implement, and evaluate an innovative flood forecasting system to help authorities better predict flooding potential in a watershed.

Stream-stage sensors will be installed on bridges in the Squaw Creek watershed to help develop a flood forecast model for Iowa.

IFC researchers developed an affordable bridge-mounted electronic stream-stage sensor that uses sonar to measure the distance from the sensor to the water’s surface. Researchers deployed 20 of these sensors within the Squaw Creek basin in Central Iowa, upstream from its junction with the South Skunk River. The automated sensors measure stream water height and transmit the information automatically to the Iowa Flood Center, where it is available online through the Iowa Flood Information System.

The data these sensors collect are combined with a state-of-the-art mathematical model that uses detailed digital elevation models of the landscape, NEXRAD rainfall, and soils and land use data to accurately represent flow through the watershed. Sensor-collected data is used to continuously refine the hydrologic model’s reliability until it can provide dependable predictions at locations where no sensor is present.

“By the end of the two-year project, the system will provide accurate predictions of flooding potential for each and every road/stream intersection in the basin,” Mantilla says. “It will establish the basis for a customized real-time flood and flash-flood forecasting system for roads and bridges across the entire state — thus increasing public safety.”

The Iowa Flood Center is part of IIHR—Hydroscience & Engineering, a research institute based at the University of Iowa’s College of Engineering. The IFC was established in 2009 to provide accurate, state-of-the-science-based information to help Iowans better understand their flood risks. It is the nation’s first academic center devoted solely to the study of floods.