Due to severe weather forecasts, the NASA and Iowa Flood Center public outreach event scheduled for Wednesday, June 12 at 7 p.m. in Room 104, Wilder Business Center, on the Northeast Iowa Community College campus has been CANCELLED.

Representatives from NASA and the Iowa Flood Center will remain stationed at research sites to track the storm and monitor instrumentation.

The public and media are invited to meet representatives from NASA and the Iowa Flood Center at an outreach event at 7 p.m. Wednesday, June 12, in Room 104 of the Wilder Business Center on the Northeast Iowa Community College campus in Calmar, Iowa.

This spring, NASA and Iowa Flood Center researchers have deployed state-of-the-art instruments across eastern Iowa to collect ground data on precipitation as part of the IFloodS (Iowa Flood Studies) campaign. A number of these instruments are currently located in the Turkey River watershed, including a weather radar on the southern edge of Calmar, another near Elkader, and numerous rain gauges and soil moisture probes throughout the watershed. The project is part of NASA’s Global Precipitation Measurement (GPM) mission, an international satellite mission that will set a new standard for global precipitation measurements from space.

Rain gauges (similar to those shown above) are deployed across the Turkey River watershed in northeast Iowa for the IFloodS campaign to calibrate NASA’s new satellite–based rainfall measurement system.

“We’re trying to figure out how well our satellites estimate rainfall,” says Walt Petersen, GPM ground validation scientist at NASA’s Wallops Flight Facility, Wallops Island, Va. “This study is unique in that it takes space-borne observations, it takes ground-based observations, and it brings those things into a modeling framework that should further our ability to predict flooding.”

Petersen will be one of the speakers at the outreach event, which is open to the public. He will be joined by Iowa Flood Center Director Witold Krajewski, based at the University of Iowa. Krajewski, who was instrumental in bringing the NASA team to Iowa, says the project will likely benefit the people of Iowa in a very real way.

“Our hope is that with all that information, we can really improve our flood forecasting models,” Krajewski explains.

Here’s the rainfall forecast for the next hundred years: whatever you’re experiencing now will become more extreme.  A new NASA rainfall study predicts that in the next 100 years, wet areas will receive more very heavy rainfalls, while arid regions will experience more droughts.

The study, which will soon appear in the journal Geophysical Research Letters, used data from 14 global climate models. William Lau, NASA’s deputy director of atmospheric studies and the study’s lead investigator, says the results are “amazing.”

Lau’s study is the first to examine the global rainfall system from a basic science viewpoint. While the global climate models produce differing results for specific locations, one result is clear across the board: as global temperatures rise, the atmosphere can hold more water vapor as moisture. The moisture tends to collect in areas that already receive significant rainfall, while intensifying droughts in already dry areas. For each degree Fahrenheit of global temperature increase, wet areas receive 3.9 percent more heavy rainfall. Meanwhile, droughts increase by 2.6 percent in dry areas.

Iowa Flood Center researcher Gabriele Villarini also conducts research on rainfall based on observational records, although he was not involved in this study. He calls the NASA study fascinating. “These modeling results are consistent with some of the detected changes in rainfall over the Central United States, with a redistribution toward more intense rainfall over the recent past,” Villarini says.

The Iowa Flood Center is partnering with NASA on the Iowa Flood Studies project, also known as IFloodS. IFloodS researchers are collecting ground data across Eastern Iowa as part of NASA’s Global Precipitation Measurement Mission, an international satellite mission that will set a new standard for global precipitation measurements from space. To learn more about GPM, visit http://pmm.nasa.gov/ifloods.

The advanced NASA Polarimetric (NPOL) precipitation radar is deployed for the IFloodS campaign near Waterloo, IA.

GPM is an international satellite mission that will set a new standard for precipitation measurements from space, providing worldwide estimates of precipitation approximately every three hours. The GPM Core Observatory, provided by NASA and mission partner the Japan Aerospace Exploration Agency, will launch in early 2014. Scientists are already at work, however, developing the methods for turning satellite observations into meaningful data by measuring rainfall with existing satellites and rain gauges in the field, and then using that data for societal applications, such as flood forecasting and monitoring of water resources

“We’re trying to figure out how well our satellites estimate rainfall,” said Walt Petersen, GPM ground validation scientist at NASA’s Wallops Flight Facility in Virginia. “This study is unique in that it takes space-borne observations, it takes ground-based observations, and it brings those things into a modeling framework that should further our ability to predict flooding.”

NASA and IFC personnel install instruments in the field that will measure characteristics of precipitation during the campaign.

With rainfall estimates in hand, the science teams input them into flood prediction computer models and then evaluate how the rain estimates and their uncertainties affect the outcome of the flood forecast, said Petersen. Rainfall estimates of water content and intensity are vital inputs for forecasters who need that information to determine whether or not streams and rivers will flood and impact people living in the floodplain.

The field campaign, which is taking place from May 1 to June 15, is a partnership between NASA and the Iowa Flood Center at the University of Iowa, Iowa City. The Iowa Flood Center was established after the unprecedented flooding, particularly of Cedar Rapids, in 2008, said Witold Krajewski, the Center’s director. Since then, the Center has improved field monitoring of stream and river height and developed a ‘library’ of flood inundation maps of where flooding may occur for some of Iowa’s most vulnerable communities.

Many variables go into flood prediction, said Krajewski, including soil type and moisture, stream and river geography, and land use. Some variables are difficult to measure, such as how water flows underground after it soaks into the ground. Rainfall, while challenging, is one of the easier variables to measure because we can see it, he said.

The advanced NASA Polarimetric (NPOL) precipitation radar being deployed just south of Waterloo, Iowa, will look at rainfall above a line of ground instruments stretching toward Iowa City. The NPOL radar scans a volume of the atmosphere as it transmits pulses oriented in two directions, horizontal and vertical, returning three-dimensional images that provide information for distinguishing the size, shape and distribution of raindrops within rainclouds. This view will help scientists understand the physics of rainfall, essentially where ice, rain and sleet occur in clouds, how precipitation particles form, grow and interact, and how the distribution of raindrops changes as a function of height, said Petersen.

“The physics in the air column, all the way to the top of the cloud, affect how that rain forms and falls and how much rain you get at the surface,” he said. Better understanding of the physics will improve rainfall estimates from space.

A second NASA ground radar, called the Dual-Frequency, Dual-Polarimetric Doppler Radar (D3R), will collect data at similar frequencies to the Dual-frequency Precipitation Radar that will fly on the upcoming GPM Core Observatory. The orbiting satellites that will collect data as they pass over Iowa each carry an instrument called a microwave radiometer, the same type of instrument as the Core’s second instrument, the GPM Microwave Imager.

“Here in Iowa, we have basins of varied sizes that are well instrumented compared to some other parts of the country,” said Krajewski. That’s one reason that NASA chose Iowa for its field campaign, according to Petersen. Krajewski added, however, that with the additional instruments from NASA, “collectively we will be gathering data that will be without precedent.”

The GPM and IFloodS science teams will first use the ground radar and gauge data to develop a reference for how much rain is actually falling out of the sky, said Petersen. They can then compare the ground reference to those of the satellite estimates of rainfall. Secondly, both sets of data are fed into flood forecasting models for the Cedar and Iowa rivers. The ground rain data alone goes into a reference model experiment that creates a flood forecast. Then the researchers will see how well the other flood forecasts that include data from satellites and even other weather prediction models do in comparison.

For the GPM mission, the results of these comparisons mean a better interpretation of the raw rain data and improved understanding of the rainfall estimates the new satellite will provide from space. For the Iowa Flood Center, Krajewski said, the benefit could be closer to home: “Our hope is that with all that information, we can really improve our flood forecasting models.”

While the official kickoff for the IFloodS (Iowa Flood Studies) campaign, a collaboration between NASA and the Iowa Flood Center, is officially scheduled for May 1, on the ground activity in Iowa picked up earlier this month.

NASA and Iowa Flood Center staff have been busy deploying instrumentation, such as radars, rain gauges, and disdrometers, to field locations in the Cedar, Iowa, and Turkey River watersheds in preparation for the campaign.

Staff took advantage of some sunny days in early April to complete the initial deployments and worked through cold and rainy conditions over the last week. In the coming week, the large NASA NPOL radar will be deployed near Waterloo. 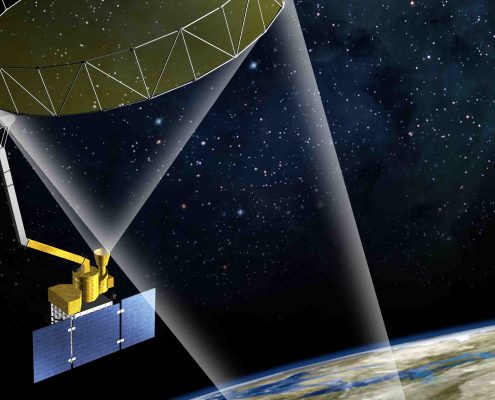 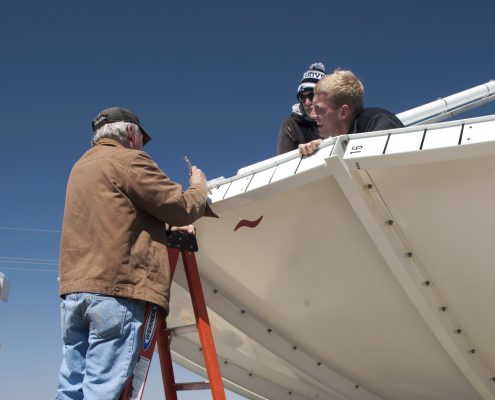