Hydrological hazards are enormous risks for communities. A Multi-Hazard Tournament (MHT) allows members of a watershed community to evaluate adaptation options to develop mitigation strategies for multiple water-related hazards such as floods, drought, and water pollution. Hazard risk assessment and minimization of water quality issues and water resources are all parts of the plan.

In late 2018, the South Dakota Department of Environmental and Natural Resources (DENR) launched an online flood information system modeled on the system developed by the Iowa Flood Center.

The project began in 2016, when DENR officials expressed interest in creating a flood information system for the Big Sioux River Basin to enhance flood response and preparedness. Officials wanted flood forecasting models, inundation maps, and community maps for their system, and cited IFIS as an existing system that matched their vision. IFC Director Witold Krajewski jumped at the opportunity to get involved in a project that would map the Big Sioux River, which feeds into rivers in northwest Iowa.

The IFC and DENR collaborated with RESPEC, a private engineering company, to develop BSRFIS. The IFC completed cyber components of the project because BSRFIS uses most of the infrastructure and code from IFIS. RESPEC and other sub-contractors handled modeling and mapping. In late 2018, the DENR launched the completed system, which includes five community maps, rainfall forecasts, weather conditions, and other features. IFC will continue to provide maintenance support for the BSRFIS.

Following the success of the project, the IFC is looking to pursue similar joint projects in the future.

“We’re always looking for opportunities to spread what we know and take on projects like this,” says IFC researcher Ibrahim Demir, the primary architect of IFS and BSRFIS. “If an organization or agency requests this, we’ll always consider collaborating.”

Krajewski also notes that projects in neighboring states including Nebraska, Missouri, Kansas, and Illinois will be a topic of discussion moving forward. For the time being, Krajewski says it is an encouraging development that an outside agency recognized the strength of IFIS.

“I think this project serves an acknowledgement of a job we did well. They recognized the usefulness of IFIS, and wanted a system like it for themselves,” Krajewski says. ”That made us feel proud of the work we’ve done.” 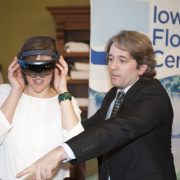 The report highlights new technologies currently being developed by IFC Associate Research Engineer Ibrahim Demir, including “Flood AI,” an artificial intelligence system, as well as holograms that show projected flood maps. Flood AI is like Siri or Alexa, allowing users to ask questions related to flooding in their area and receive immediate responses.

“It’s like talking to a friend who happens to be a flood expert,” Demir says.

Holograms provide a visual platform to show the extent and depth of predicted flood waters. These unique visualizations help people process information faster, allowing first responders to better understand the potential impacts to their community and to react sooner and with more confidence to flood events.

The recent fall flooding across central and eastern Iowa is a reminder that we need to continue to develop and improve technologies to lessen flood impacts. As rainfall becomes more widespread and intense, Iowans will rely on easy access to the IFC’s critical information that will help them stay informed during a flood event.

The Iowa Flood Center is based at the University of Iowa and is the only academic center in the nation solely devoted to flood research. In 2019, the center will celebrate a decade of serving Iowans and helping to build a more flood resilient state.

Ibrahim Demir of the Iowa Flood Center (IFC) at the University of Iowa (UI) has been awarded a grant from Microsoft as part of its “AI for Earth” program. Dr. Demir is an assistant professor of civil and environmental engineering who also leads the Hydroinformatics Lab at the University of Iowa. He will use the award to develop “Flood AI,” an artificial intelligence system that serves as a virtual flood expert (similar to Siri). Flood AI is accessible through many smart devices, including smartphones, chat applications such as Skype, smart home devices, and more. Users can ask Flood AI any flood or weather related question and get a quick answer.

It’s like talking to a friend who happens to be a flood expert, Demir says.

AI for Earth is a Microsoft program aimed at empowering people and organizations to solve global environmental challenges by increasing access to AI tools and educational opportunities, while accelerating innovation. Via the Azure for Research AI for Earth award program, Microsoft provides selected researchers and organizations access to its cloud and AI computing resources to accelerate, improve, and expand work on climate change, agriculture, biodiversity, and/or water challenges.

Demir is among the first recipients of AI for Earth, which launched in July 2017 after a competitive and selective grant process. Microsoft awarded the grants in recognition of the potential of the work and power of AI to accelerate progress.

“Ibrahim’s work is part of the foundation of the Iowa Flood Center’s service to Iowans,” says IFC Director Witold Krajewski. “He is the chief architect of the Iowa Flood Information System, which puts the IFC’s innovative flood-related tools and information in the hands of all Iowans.”

The Iowa Flood Center is based at IIHR—Hydroscience & Engineering, a UI research institute focused on fluids engineering. IIHR Interim Director Gabriele Villarini says Demir’s work is on the cutting edge of hydroinformatics — the art and science of providing data and information directly to users through online systems. “Ibrahim continues to break new ground,” Villarini says. “His work directly serves Iowans by providing the real-time information they need to make informed decisions when flooding occurs.”

When flood events happen, people need information — no matter what the time of day or night. Demir says that Flood AI—available 24 hours a day—will be like talking to a friend who happens to be an expert on flooding. Flood AI will support the Iowa Flood Center’s mission to provide flood-related information and technology that is immediately useful to Iowans.

To date, Microsoft has distributed more than 35 grants to qualifying researchers and organizations around the world. Today, Microsoft announced its intent to put $50 million over five years into the program, enabling grant-making and educational training at a much larger scale.

More information about AI for Earth can be found on the website:  https://www.microsoft.com/en-us/aiforearth