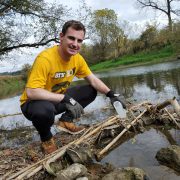 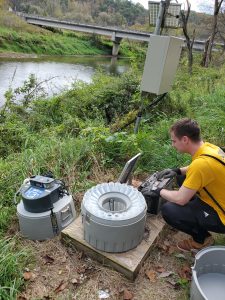 Anderson crouches down to set up the ISCO sampler in the Yellow River in Northeast Iowa.

Elliot Anderson works between rainstorms, gathering data from collection bottles left in the water. Each storm is an opportunity to learn more about the peak flow conditions and nutrient concentrations of rivers across Iowa.

Anderson is a PhD student at IIHR—Hydroscience and Engineering, and was born in Geneva, Ill., a town just outside Chicago. When he was deciding on colleges, he knew he wanted to stay in the Midwest and eventually settled on Purdue University. There, he received an undergraduate degree before attending the University of Illinois at Chicago for a master’s degree, both in civil engineering. After that, Anderson worked as a consultant for five years at Civiltech Engineering in Chicago before returning to Iowa.

“After I did my undergrad and was kind of over doing consulting work, [I] wanted to try my hand at research. So I was looking for a PhD, looking to stay in the Midwest, and looking to do something water-related,” Anderson says. “Iowa was a pretty natural choice for those three things.”

Today, he is a member of Larry Weber’s Iowa Watershed Approach research team, studying phosphorus contamination of streams and rivers during peak flow conditions. Though there is an abundance of research for the waterways at base flow, increased flow conditions are infrequent and tough to predict, and thus can be difficult to measure.

Anderson says the data collected thus far matches the expected results for peak flow conditions based on their previous base flow data.

“If it was something different, or things do turn out to be different, that’s still really informative and there’s still an interesting story to tell about how you describe phosphorous at the higher flows apart from the lower ones,” Anderson says. 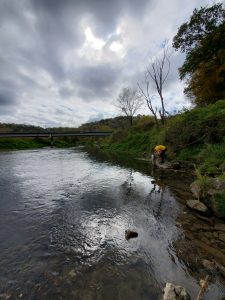 The team is still in preliminary stages of its research, so while the data currently follow a familiar trend, that may change as they collect more information.

Water content studies help Anderson and his team understand how the phosphorus concentration in the water changes with flow variance. Phosphorus acts as the limiting reactant in fresh water; it provides nutrients to algae, which can cause algal blooms in Iowa waterways. These blooms contribute to a decline in health of lentic environments.

Another aspect of the team’s research is to determine if current mitigation processes are reaching the pre-determined nutrient reduction benchmarks set by the Iowa Nutrient Reduction Strategy. The goals aim to improve the overall ecosystem health in Iowa and all the way downstream to the Gulf of Mexico.

Anderson says audio books keep him entertained as he crisscrosses Iowa collecting data from bottle-filling stations installed across the state. When he’s home, Anderson says he likes to keep up with Chicago sports teams. He was still in Chicago when the Cubs won the World Series for the first time in over 100 years back in 2016, and since he started at the University of Iowa, he has enjoyed attending Iowa football games.