“It’s easy to ignore a problem if you don’t know it exists,” says IIHR and Iowa Flood Center Engineer Dan Ceynar. Ceynar knows what’s hiding under the surface of Iowa’s rivers, and a lot of it isn’t pretty: tires, water heaters, stoves, snowmobiles, refrigerators, bicycles, bed frames, and more. “You name it, it’s been pulled out,” Ceynar says.

Ceynar has firsthand knowledge about pulling trash out of rivers. He’s been involved with the Iowa Department of Natural Resources’ Project AWARE (A Watershed Awareness River Expedition) since 2006, when it came to the Iowa River near Iowa City. He’s now a river clean-up veteran who brings shovels and other tools to excavate the big stuff out of the mud – such as sections of cars, or, in several instances, boats – including a 17-foot fiberglass ski boat. 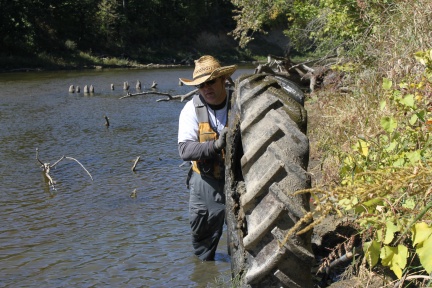 This year, 388 participants ranging in age from 2 to 80 cleaned up 91 miles of the Big Sioux River, which forms the border between Iowa and South Dakota in northwest Iowa. They removed 28.8 tons of trash (that’s 57,523 pounds!) from the river, including 549 tires.

The six-day project moves to a different Iowa watershed for one week each July, bringing hundreds of canoe-based volunteers to clean up the stuff that shouldn’t be there. The effort is sponsored by the Iowa Department of Natural Resources (this year with support from South Dakota Game, Fish, and Parks), with help from other sponsors such as IIHR—Hydroscience & Engineering and the Iowa Flood Center.

Most participants camp in tents and share evening campfires along the river after a catered meal and educational programs. There’s often music, and lots of low-key socializing.

One of the best things about Project AWARE is its power to change hearts and minds, Ceynar says – especially for kids. He hopes that seeing the vast amounts of trash the clean-up pulls from the river can help bring about a change of attitude in kids and adults alike.