The IFC is developing a web-based platform to report on the performance of the IFC’s Hillslope-Link Model (HLM) that provides real-time stream-stage forecasts for about 2,000 locations in Iowa communities where stream gauge observations are available.

“This study represents our first attempt to extensively evaluate the results of the model, and it provides the basis for their future improvements.” — IFC researcher Felipe Quintero

Since 2012, IFC researchers have operated a real-time hydrologic model to provide flood forecasts and current flood conditions. However, until this project got underway, an exhaustive evaluation of the model’s performance, considering long-term datasets of rainfall observations and discharge projections at multiple locations, was missing. The authors conducted retrospective simulations with the model, using rainfall data from 2009–16. The simulations feature a 15-minute time resolution and are compared to discharge observations of the same resolution. IFC researchers are comparing data from about 140 Iowa locations where observations are available. 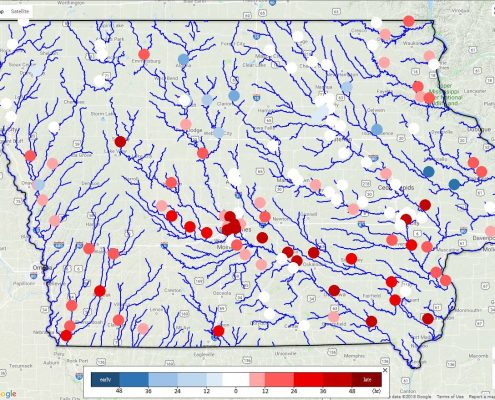