Officials in South Dakota are using Iowa Flood Center technologies to expand flood response and preparedness for the Big Sioux River. This collaborative project demonstrates the IFC’s potential to expand and improve flood prediction capabilities in other states.

“Using IFC-developed cutting-edge technologies, we have the leadership and ability to improve how people adapt to flooding, not only in Iowa, but also throughout the Midwest, the United States, and beyond.” — IFC Director Witold Krajewski 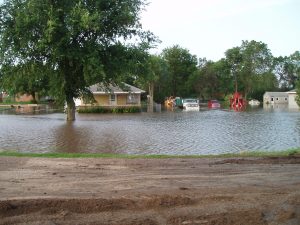 Thanks to the IFC’s leadership and expertise, South Dakota was able to develop a flood alert system similar to the Iowa Flood Information System (IFIS). SDFIS will include inundation maps showing the extent and depth of predicted flood waters, real-time weather and stream conditions and forecasts, and flood alerts for approximately 50 locations.

South Dakota officials will use SDFIS to mitigate flood impacts significantly affecting both people and infrastructure. The system will allow decision-makers to respond to and prepare for severe flood events under a range of changing climatic conditions, reducing future flood risk.

As extreme weather events become more frequent and intense, web-based technologies such as this will provide critical resources that can be expanded to serve other parts of the United States and beyond. View more here.