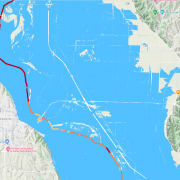 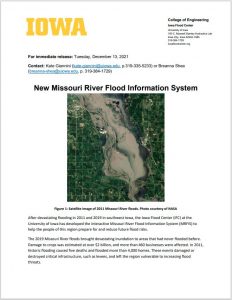 After devastating flooding in 2011 and 2019 in southwest Iowa, the Iowa Flood Center (IFC) at the University of Iowa has developed the interactive Missouri River Flood Information System (MRFIS) to help the people of this region prepare for and reduce future flood risks.

The 2019 Missouri River floods brought devastating inundation to areas that had never flooded before. Damage to crops was estimated at over $2 billion, and more than 460 businesses were affected. In 2011, historic flooding caused five deaths and flooded more than 4,000 homes. These events damaged or destroyed critical infrastructure, such as levees, and left the region vulnerable to increasing flood threats.

“It’s not a matter of if the region will have another flood like in 2011 or 2019, it’s a matter of when,” says IFC co-founder Larry Weber. “It’s critical for people in this area to have access to the information in MRFIS to be able to make informed decisions to reduce their flood threats, now and in the future.”

The dynamic and comprehensive MRFIS is capable of estimating flood impacts based on historical, forecasted, and hypothetical flow scenarios, including levee breaches. The system provides state agencies, communities, and individuals with enhanced, reliable, and timely information to help them improve decision-making and floodplain management. The interactive system is freely accessible; it displays the inundation and propagation of floodwaters visually through a Google Maps-based web environment. 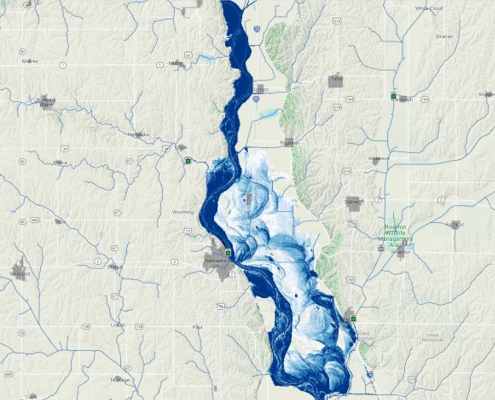 MRFIS provides critical information to assist with long-term planning and redevelopment strategies focused on helping bring vitality and economic stability back to southwest Iowa. The system is part of a larger project designed to develop a comprehensive assessment and resiliency plan for Mills and Fremont counties. This collaborative effort involves many federal, state, and local partners. The project is funded by the U.S. Department of Commerce Economic Development Administration and administered by the Iowa Economic Development Authority.

“It’s been an incredibly rewarding experience for our team to collaborate with such an amazing team of partners who are so committed to improving flood resiliency in the region,” says Weber. 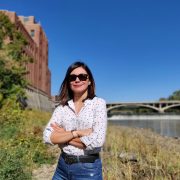 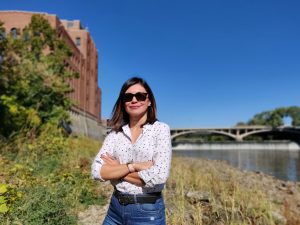 Though they both grew up in Colombia, Marcela Rojas and her husband, Felipe Quintero, met over 5,000 miles away in Barcelona, Spain. They were both attending the Universitat Politècnica de Catalunya, where they were each pursuing graduate degrees.

After completing school and earning a degree in civil engineering, Rojas worked in Colombia in hydraulics for six years. She then completed her master’s degree—also in civil engineering—and spent seven years working with a German construction company based in Barcelona on European infrastructure before she and her husband moved to Iowa when he accepted a job with the Iowa Flood Center (IFC) in 2013.

“There is no better place for studying floods than Iowa, so we came together,” Rojas says. “Then I had the opportunity to join to the flood center, so we decided to stay here longer.”

Nearly nine years later, the two are still at the flood center, working to provide accurate and reliable flood information for the people of Iowa. 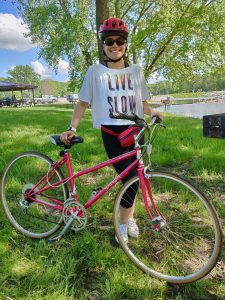 Rojas says helping Iowans is one of her favorite parts of working at IFC. She says she noticed in her own hometown that people did not always have access to basic needs, including roads and drinking water. It was there during high school that she decided she wanted to use science to improve the lives of those around her, which she is excited to be doing for Iowans today.

Rojas contributes to collaborative projects between the flood center and other state and federal organizations, such as the Department of Transportation and the U.S. Army Corps of Engineers. She also works on data accuracy and acquisition for flood prediction modeling for both IFC and USGS stream sensors. Right now, she is developing rating curves for USGS sensors in Iowa to translate the state height information into discharge data that can then be used in flood modeling.

Additionally, she confirms that the IFC programs are applying the appropriate data and conveying the correct information to the public. Accuracy and improvement of the hydrologic and hydraulic models are vital to maintaining an up-to-date forecasting system and virtual models. 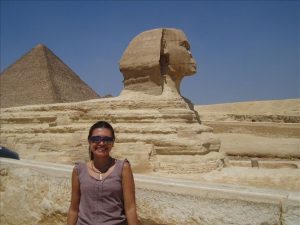 Though the last year and a half has put some of her plans on hold, Rojas says one of her favorite activities is traveling. She enjoys meeting new people, trying new food, and visiting new places. Her love of new experiences is a big part of why she likes living in Iowa, even though it means being far from her home country. While she is waiting to be able to travel again, she is enjoying bike rides around Iowa City and spending time with her husband and cat.

Moving forward, Rojas says she would like to work on projects related to climate change. In particular, she says, periods of drought are becoming more common and have longer-lasting impacts on the environment, and scientists need to be prepared.