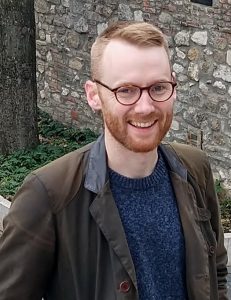 When Riley Post first attended the University of Iowa in 2006, he was an undergrad deciding whether to become a structural engineer or a high school math teacher. He soon focused on engineering and accepted an internship with the city of Rock Island, Ill. A year later, he began work with the U.S. Army Corps of Engineers (USACE), where he learned about locks and dams on the Mississippi River and the movement of water through the Midwest.

In the summer between his second and third years at Iowa, the 2008 floods ravaged the area, destroying buildings and changing the course of his studies. During the flood, Post—who was still new to hydrology—was sent out every night on a Gator to monitor the levees protecting Rock Island, Ill. from the rising Mississippi River. It was during that time that Post started to take a real interest in hydrology and flood events.

He continued his work with the corps for 10 years—switching gates, watching levees, and monitoring water levels in reservoirs across Eastern Iowa.

Post had always been interested in continuing his education, and in 2020, he and his wife both decided it was time to return to the University of Iowa to pursue their PhDs. While his wife works across campus in the statistics department, Post spends his time in the Stanley Hydraulics Lab under the mentorship of Witold Krajewski, director of the Iowa Flood Center (IFC) and professor of civil and environmental engineering.

Post says his work today is similar to his duties with USACE, just on a smaller scale. Here, he uses the IFC’s Hillslope Link Model (HLM) to simulate riverine flooding and the distribution of water to farm ponds and wetlands in an effort to manage flooding in Iowa.

In these models, gauges at each basin would allow hydrologists and engineers to constantly monitor the water levels. They can then remotely manipulate outlet gates to store and release water. Each reservoir has a target water level to maintain that both holds enough water to supply users downstream during a drought and keeps levels low enough that a rainstorm would not flood the area.

“It creates a habitat for birds and fish and gives recreation, but also the big thing that the reservoir is there to do is to supply water when there’s a drought and store water during heavy rain,” Post says. “Like the power plant right across the river here, Iowa City’s drinking water has intakes, and those types of things that rely on steady supply from the reservoir.”

Post says his work is not to eliminate flooding but rather to prove the efficacy of a farm pond and wetland water storage network to reduce flood impacts. Projects such as the Iowa Watershed Approach are already implementing water storage methods for flood mitigation, but a project to reduce flooding at such a magnitude requires participation from municipalities and landowners across the participating watersheds. The parties involved must agree on land usage and best practices. Post’s research seeks to determine whether actively managing a system of farm ponds and wetlands on that land could be effective in lowering the peak flow along the streams and rivers.

In fall 2021, researchers and students were still returning to in-person work at IIHR, and Post was back on campus for the first time since he returned to the university more than a year ago. He says IFC’s resources for students and the knowledge base amassed over the last decade are remarkable.

“I don’t know that you would find a better place to study flooding,” he says. 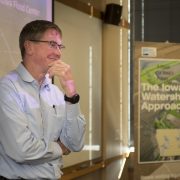