The University of Iowa has named Witold Krajewski, professor of civil and environmental engineering in the College of Engineering and research engineer at IIHR-Hydroscience & Engineering, as director of the new Iowa Flood Center, effective immediately.

In April, the center received $1.3 million to enable it to conduct real-time forecasting of floods and help communities improve flood monitoring.

In late June 2008, Weber and Krajewski, at the suggestion of UI President Sally Mason, brought National Science Foundation (NSF) Director Arden L. Bement, Jr. to the UI campus to meet with researchers. Following his visit, UI researchers applied for and received nearly a dozen NSF-funded projects valued at a total of more than $500,000. These projects include such studies as an analysis of Cedar Rapids soil samples to learn what industrial and farm chemicals may have been carried into the city by floodwaters.

“Gathering UI researchers together for Dr. Bement’s campus visit last June gave us a unique opportunity to learn about other expertise on campus,” recalled Krajewski. “The wide range of research projects, led by engineers, geographers, and sociologists, convinced us that we needed to think beyond the 2008 flood and consider how we might study floods together within the context of a new multidisciplinary flood center.”

Because much of IIHR’s flood-related work is basic research funded though small NSF grants, Krajewski recently submitted a separate proposal for a National Flood Research Center in response to an NSF call for proposed Science and Technology Centers. If funded, it would be one of several Science and Technology Centers across the United States, but the only one focusing exclusively on floods.

The state center, however, will allow for work focused specifically on applications for Iowa, Weber said.

The Iowa Flood Center will establish community-based programs to improve flood monitoring and prediction along Iowa’s major waterways, as well as share center resources and expertise across the state to develop a flood-savvy work force.

Krajewski said that the goal of the center is to develop physically based numerical models that will improve flood forecasting and mitigation understanding in the basin — all with the goal of trying to prevent or at least lessen the effects of flooding.

The Iowa Flood Center will also collaborate with state and federal agencies, such as the Iowa Department of Natural Resources, the U.S. Army Corps of Engineers, the U.S. Geological Survey, and the National Weather Service. 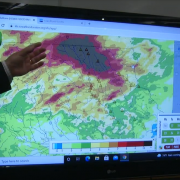 Increasing efficiency through IT

Concerns About Flooding Carry Into Next Week