From the Very Beginning

From the very beginning, Dan Gilles has been there: on the banks of the Iowa River. When the Iowa Flood Center (IFC) legislation was signed in 2009, Gilles was there, entering his first year of graduate school at IIHR. When the Flood Center was awarded the Statewide Floodplain Mapping Project, he was there, accepting an offer to stay on after graduation to help complete the project. Today, Gilles is still here, as the IFC works on its next big venture: the Missouri River Project. 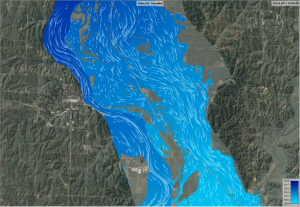 This model of the Missouri River shows the flow paths in the channel and behind the levees after a hypothetical breach.

On a normal project, Gilles divides his time between computer modeling and gathering field data.

“That’s been a lot of fun at times,” he says, “getting out in a boat or in a kayak and using some of the survey equipment.” It can be a nice change from the office, Gilles says, but not always. “When the equipment’s not working or you get your boat stuck, it can be frustrating,” he says. 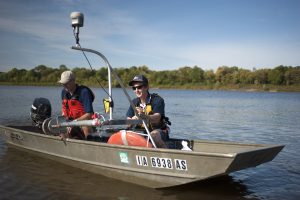 With Gilles’ technical expertise, 33 Iowa communities and sections of the Mississippi River have flood inundation maps that show the extent and depth of predicted floodwaters to aid in planning and decision-making before, during, and after a flood. The maps provide a graphic representation of where floodwaters will go and how deep they will be—a boon to planners, emergency managers, and business and homeowners. The maps are freely accessible on the IFC-developed Iowa Flood Information System web platform (IFIS), and more are added every year.

Outside of work, Gilles has plenty to keep him busy; he and his wife Amanda have four children: a 7-year-old, a 4-year-old, and 1-year-old twins. When the kids are otherwise occupied, Gilles likes to garden or focus on woodworking projects, a hobby he picked up just before the pandemic. He says his current project is a collection of small shelves for picture frames requested by his wife; he has also made a baby gate, a mantel, and a clock.

Gilles and the rest of the IFC team plan to have a working version of the Missouri River real-time mapping system up on IFIS by the end of this year. They are also planning to use the program for future research on the efficacy and operation of flood modeling software during a large-scale flood event.