About 200 miles south of Mount Everest sits Bihar, a state in northeastern India with flooding issues that mirror those found in Iowa. The levees running along the banks of the Bihar’s Kosi River are similar to stretches of the Mississippi and Missouri rivers that flank the state of Iowa. The similarities between the two landscapes are part of what drew Libby Casavant, a grad student with the Iowa Flood Center, to her current project—mapping the sediment flow through the Kosi River using two- and three-dimensional modeling software. 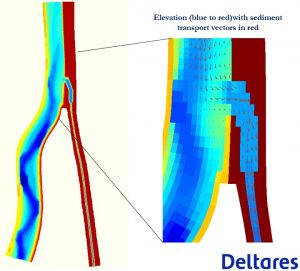 “One of the major differences is that they have a huge amount of sediment that comes through their river from the Himalaya Mountains, so that’s sand, mud, and dirt, traveling with the flow of the river, and it tends to accumulate in the flatter areas of Bihar,” she says.

Casavant explains that due to the levees on either side of the river, sediment deposits from the Himalayas have caused the riverbed to become “superelevated” above the floodplain. As the sediment rises, ruptures or overtopping of the levees become both more likely and more dangerous. Even small breaches can have dire consequences, as sand and other sediment from the elevated streambed deposit up to several feet deep in agricultural areas, destroying the land’s fertility.

As she continues to work with the Delft 3D model, Casavant has her sights set on the Netherlands, where she has an internship waiting for her. There, she will continue her work with the Kosi River modeling, adding functionalities such as extra channels, dams, and alternative levee locations. 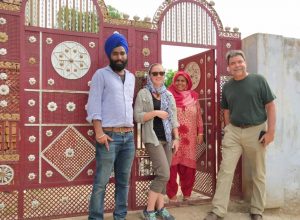 While working remotely, Casavant focused on hobbies such as running, camping, playing music with her fiancé, and wedding planning. Now that the world is opening up, she says she feels like her personal life is changing again, but she couldn’t be more excited for the re-opening of IIHR.

“I loved getting to talk to researchers that are doing all these different, really cool things in person—you don’t have to set up a Zoom call to talk to somebody,” she says. “Walking by, having those conversations where you can learn something totally new that might be irrelevant to what you do, or maybe super helpful to what you do. I feel like that was such a great asset before the pandemic.”

Casavant also accepted the role of presenting the IFC weather briefing at the virtual IFC weekly meetings during the pandemic. For the first in-person meeting in the position, she decided to make her presentation more interactive with a trivia question and a prize for the winner.

Casavant recently had her first chance to present her work to officials in India in a meeting on the monsoon season flooding that has devastated the country. Alongside her supervisor, Sanjay Giri, she will present flooding research from the Mississippi River and recommendations on future sediment diversion structures.